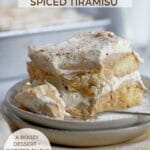 The holiday season just screams warm spices, cozy drinks and boozy desserts. {It's not just me that feels this way, right?}. This twist on tiramisu combines my favorite holiday cocktail and the classic Italian dessert. So let me introduce you to Tom and Jerry dessert tiramisu.

Are you familiar with a Tom and Jerry?? No, not the cartoon characters from my childhood, but instead a winter cocktail. This drink was a Christmastime staple in my house when I was growing up. Don't worry, the kids got the non-alcoholic version! And now I make it for my own family.

what is a tom and jerry??

Tom and Jerry is a vintage cocktail that was created in the 1820's. It's made from an egg based, sweet and spiced batter; served warm with a shot {or two} of rum or bourbon and hot water. Think a warm, alcohol laced and less "eggy" version of eggnog.

A fun side note ~ the Tom and Jerry recipe my family has came from a bartender friend in the small Midwest town my parents grew up in. My mom has guarded that recipe fiercely for most of my life. After years and years of begging, she finally gave me the recipe several years ago! {and no, I've not found another version like it on the internet}.

how do you make tom and jerry dessert tiramisu?

Essentially four steps stand between you and this dessert.

ingredients needed for this boozy tiramisu

Mascarpone can be found in the deli section in most grocery stores. It's often by the fresh mozzarella. I usually find ladyfingers in the bakery section, but my local Sprouts market had them in the cookie aisle. You can also order a larger package of ladyfingers on Amazon. I like using a dark rum, but any rum or even bourbon will work here.

To make the simple syrup ~ mix ¾ cup granulated sugar and ½ cup water in a small saucepan over medium-low heat. Stir until the sugar completely dissolves and the mixture is clear. Remove from the heat and allow to cool before using.

Remember to pin this recipe to Pinterest! Use the button on the recipe card or the share buttons on the side or bottom of this page.

In a medium saucepan, whisk together the egg yolks and sugar until combined, then whisk in the milk.  Cook over medium heat, whisking continuously, until the mixture boils.  Allow to boil for 1 minute, then remove the saucepan from the heat and whisk in the cinnamon, nutmeg, clove and allspice.  Transfer the mixture to a medium to large bowl and allow the mixture to cool for 15-20 minutes and then cover tightly and chill in the refrigerator for one hour.

Next, whip the heavy cream until stiff peaks. I use a hand held mixer, but a stand mixer with the whisk also works great.

let's put this tom and jerry dessert tiramisu together!

An 8x8 baking pan is what I recommend for this recipe. A 7x11 baking dish would also work, but the layers won't be as tall.

In a shallow dish, mix half of the rum and half of the simple syrup. The ladyfingers soak up the mixture quickly and I find it easier to make sure you have enough liquid by splitting it for each layer of ladyfingers.

Dust the top layer of whipped cream with a little cinnamon and nutmeg, then place the tiramisu in the refrigerator uncovered for 2-3 hours. After 2-3 hours, dust the top with a layer of confectioner's sugar, then cover and continuing chilling a minimum of 5 more hours or up to 1 day.

is this boozy dessert for adults only?

Yes!! A full cup of alcohol is going into this dessert, so it should be served to a 21+ crowd only.

My multiple testers of this dessert agreed that 1 cup of rum was perfect for a cocktail vibe in this recipe. You definitely get the rum flavor, which is complemented by the sweet Tom and Jerry mascarpone and whipped cream. If you would like a less potent dessert, reduce the rum to ¾ of a cup and keep the simple syrup measurement the same.

Remember to snap a picture and tag me @twosugarbugs on Instagram if you make this Tom and Jerry Dessert Tiramisu. It warms my heart to see you bring these recipes to life! Thank you for being here and happy baking!

If you make this recipe {or any recipe!} from two sugar bugs please come back and leave a review and a ⭐️⭐️⭐️⭐️⭐️ star rating.  I read every comment, and I LOVE hearing from you!

Cover and store any leftovers in the refrigerator for up to three days.

**My testers found 1 cup of rum to give the dessert a distinctive “cocktail” vibe.  When tested with a half cup rum, it was hard to notice the rum.  If you prefer a less boozy version, reduce the rum from 1 cup to ¾ cup, keep the simple syrup at the same measurement.

The nutrition information is an estimate and may not be entirely accurate.

Did you make this recipe?