A decadent and fudgy Irish cream brownie. Made with Irish cream in the brownies and frosted with a fluffy, Irish cream buttercream. Perfect for St. Patrick's Day or honestly anytime a brownie craving strikes!

So I did a thing and I seriously don't know if I'm going to make it.

These fudgy Irish cream brownies are not helping either!

See, I gave up sweets for Lent. We're only five days in and I think I am dying! This isn't my first time with giving up sweets, but I haven't done it for a few years and I forgot how HARD it is!!

Then I went and made Irish cream brownies. They are seriously fudgy and topped with a fluffy Irish cream buttercream. They smell heavenly and the taste is full of chocolate and Irish cream. Pure decadence in every bite.

When I started creating this recipe, I realized that I have yet to share my favorite brownie recipe with you! Silly me, I'll have to get that on the blog soon for you as they are another staple at my house.

Next, you will add the Irish cream to the melted butter and chocolate mixture. Set the mixture aside to cool while you mix your sugar, eggs and vanilla in another bowl. Then add the chocolate mixture to the sugar mixture and allow to come to room temperature. I find this happens in about the time it takes me to sift the dry ingredients together.

After you add the flour mixture to the butter, chocolate and sugar mixture you will add in some chocolate chips or chocolate chunks. You will want to toss the chocolate with a little of the remaining flour as this helps to keep the chocolate from sinking to the bottom of your fudgy Irish cream brownies.

A COUPLE TRICKS TO BAKING THE BROWNIES

Line your 9x9 baking pan with parchment paper, this will help you have a much easier time getting the Irish cream brownies out once they are baked. I always give a quick rub of butter over the parchment paper as well to allow for easy removal.

Before the brownies go in the oven, drop the baking pan on the counter a few times to knock out any air bubbles. Bake for 20 minutes and then rap the baking pan against the oven shelf or quickly remove the pan and drop it on the counter again to force air to be removed from between the Irish cream brownies and the edge of the pan. Bake another 15-20 minutes, until a tester comes out barely clean. Do not overbake!! Just like my sugar cookie bars, we want a slightly underdone center to give us that nice fudgy center!

Then the hardest part. Waiting for them to cool..... Let the pan rest on a cooling rack. If you need to rush the process, let them cool 20 minutes or so on the cooling rack and then you can put the pan in the freezer for 20-30 minutes. Once completely cool it's time for my favorite part, the Irish cream buttercream.

I typically use my hand mixer to make this buttercream, but your stand mixer with the paddle attachment will work well too.

First you will want to get the butter all nice and fluffy by beating it on medium high to high. Then you'll add the powdered sugar and Irish cream on low until all incorporated. Finally, you will give it another good beating until you reach a light and fluffy consistency.

And think of me. 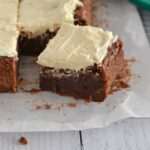 A decadent and fudgy Irish cream brownie. Made with Irish cream in the brownies and frosted with a fluffy, Irish cream buttercream.
Course Dessert
Servings 25 brownies
Author Tasia ~ TwoSugarBugs

To make the Irish Cream Brownies

To make the Irish Cream Buttercream:

I like to refrigerate the brownies after frosted to allow the bars and buttercream to firm up. Once cold, use a sharp knife to cut into desired size squares. I find using a sharp knife and wiping the knife clean between cuts give you neat and even cuts. I store the brownies covered in the refrigerator. Recipe adapted from Ina Garten’s Outrageous Brownies