Homemade baked cinnamon donuts are soft and full of flavor and made healthier with almond and whole wheat flours.

My family LOVES baked cinnamon donuts! In my quest to always try to make breakfast a little healthier, I created this donut recipe with almond flour and whole wheat flour. Donut get me wrong {pun intended😉}, these are still a treat, but they pack a little more nutrition than the average donut.

Disclosure | This post may contain affiliate links. As an Amazon Associate I earn from qualifying purchases. Ellie's Best also sent me their Bigger Better Nut Milk Bag, however all thoughts and opinions shared here are 100% my own.

Want to know something funny about me? Even though I am a gigantic fan of cookies, cakes, cupcakes, candy, etc. I'm not really a fan of donuts. Especially the typical fried donuts. Several years ago I purchased a donut pan and started playing with baked donut recipes and I've come to enjoy them.

Baked donuts are much more cake-like in texture. These baked cinnamon donuts have a soft and light crumb and go perfectly with a cup of hot coffee.

HOW TO MAKE BAKED CINNAMON DONUTS

This baked cinnamon donuts recipe performs best with room temperature wet ingredients, so try to pull the egg, almond milk and sour cream out at least an hour before you begin. Rest assured the recipe will work without this step, but they'll taste their best if you plan just a little bit ahead.

Then in another bowl, whisk the egg, dark brown sugar, almond milk, sour cream, coconut oil, and pure vanilla extract. This mixture is a little clumpy to start. I tend to be lazy and just throw everything in together, but if you start by whisking the egg, sour cream and coconut oil, the other ingredients will mix in more nicely.

Add the wet ingredients to the dry ingredients and mix until just combined. The batter is fairly thick.

Finally, spoon the batter into each well of a prepared donut pan, filling about ¾ of the way full. Bake the donuts for 8-10 minutes or until the edges are lightly browned. Allow them to cool a few minutes in the pan and then transfer to a wire rack to cool. The recipe makes 10 donuts, so I re-spray the pan with non-stick spray before baking the second batch.

HOW TO MAKE AND GLAZE THE DONUTS

While the donuts cool, whisk together the glaze. This glaze recipe makes just enough to dunk each donut. I hate making a glaze and having half a bowl of glaze leftover so expect to run out of glaze.

Whisk the powdered sugar and cinnamon together. Then add the almond milk and vanilla. I like a stiffer glaze as it adheres to the donuts better and doesn't just run off. If you like your glaze a little looser, add the almond milk a ¼ teaspoon at a time until you reach your desired consistency.

To dunk the donuts, gently place a donut in the glaze and then lift it straight up. Try not to twist your donut. If the glaze seems too thick, feel free to thin it out. If it seems too thin, dunk all the donuts and then take them for a second dunk. Top with sprinkles or sanding sugar, if desired.

HOW LONG DO BAKED DONUTS LAST & HOW TO STORE

Baked cinnamon donuts are best eaten when freshly baked and glazed. In my house, they never last more than the day they are made! They can be covered and stored at room temperature for 1-2 days or refrigerated for up to one week. Unglazed donuts can be frozen for up to 2 months. Thaw overnight in the refrigerator before warming to your liking.

Follow me on Instagram and be sure to tag #twosugarbugs so I can see all your creations!

SOME OTHER BREAKFAST RECIPES YOU MAY ENJOY 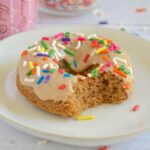 *I have tested this recipe with all-purpose flour and it will work fine if you do not have whole wheat flour **I prefer using homemade almond milk, but any milk will work Baked cinnamon donuts are best eaten when freshly baked and glazed.  They can be covered and stored at room temperature for 1-2 days or refrigerated for up to one week. Unglazed donuts can be frozen for up to 2 months. Thaw overnight in the refrigerator before warming to your liking.