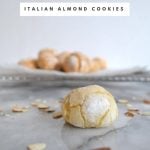 Italian almond cookies.  Slightly crisp on the outside and chewy and soft on the inside. Soft Amaretti cookies.  Deceptively simple and yet so complex.  These Amaretti cookies have a barely there crisp to the outside and a soft and chewy center.  Amaretti are gluten-free and sure to please all the almond lovers in your life.

I’ll admit it.  I have an infatuation with Italy.

Disclosure | This post contains affiliate links. The price you pay as a consumer does not change, but I may make a small commission based on your purchase. As an Amazon Associate I earn from qualifying purchases.

I had recently read the book Eat, Pray, Love by Elizabeth Gilbert and was itchy to do some traveling.  Mr. Two Sugar Bugs and I had sold our lovingly restored 1910 bungalow in the city for life in a bedroom community and our trip abroad was a prize for the big life change we had undertaken.

We spent two amazing weeks exploring Italia.  We started in Roma, worked our way to Toscana, Piemonte, Lago di Como and ended in Milano.  Large amounts of incredible food and wine were consumed and many new adventures were had.

For our time in Piemonte, we stayed at a bed and breakfast in Acqui Terme.  We had found it online and hoped it was going to be as special as it seemed from their website.  We were in for a very pleasant surprise!  The innkeepers were an American woman married to a German man.  They had spent time in the States and Germany, but were tired of the rat race and wanted to try something new so they purchased an old farm in Italy and turned it into a spectacular bed and breakfast.

Micha took us out one day to explore some of the neighboring wineries and along the way told us we’d stop to get Amaretti cookies.

One bite and I was in love.💗

Four years fly by and now it’s 2011.  We make another trip to Italia and this time I am pregnant with our Big E.  During our visit I eat lots of amazing pastas, breads, fresh veggies, cheese and salami.  I also indulge in gelato every day!  Okay, truthfully?  Gelato twice everyday!!

We spend another week in Acqui Terme and visit with our friends.  It’s even better than the first time.  We take another trip with Micha and stop at the same little shop to get Amaretti.  They are just as good as the first time and I’m still in love.💗💗

When we return home I start my quest to recreate the delectable Amaretti cookies.  After many different attempts, I believe I’ve come the closest I can come to those lovely Amaretti cookies we ate in Italy.  I hope you love them too!

You’ll start by separating your eggs.  Then you want to whisk your egg yolks in a large bowl. Gradually whisk in the superfine sugar.  At some point the mixture becomes too thick for the whisk and you will switch to a spatula. Slowly add your almond flour, mixing until combined.  **I ALWAYS weigh my almond flour, but 1.1 pounds is roughly 4 3/4 cups**  At some point the mixture will become so thick that it will stop accepting the almond flour. Now you will beat your egg whites until they reach a soft peak, be careful not to over whip them.  I prefer to do this by hand to avoid over beating the eggs. Now you’ll want to cover and refrigerate the dough for a minimum of one hour and up to 24 hours.

After chilling the dough, preheat your oven to 325ºF and prepare baking sheets with silicone baking mats or parchment paper.  Scoop Amaretti dough and roll into small balls, approximately 1 1/2 – 2 tablespoons per ball. Then roll in powdered sugar and place on prepared baking sheet.

Bake until lightly browned, approximately 20-30 minutes (it’s about 23-25 minutes in my oven).

Remove cookies from the baking sheet and allow to cool on a cooling rack.  Then prepare to fall in love!💗 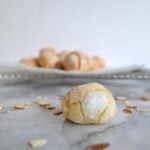 Amaretti cookies have a barely there crisp to the outside and a soft and chewy center. Amaretti are gluten-free and sure to please all the almond lovers in your life.
Servings 36 cookies
Author Tasia ~ twosugarbugs

Store Amaretti in an airtight container for up to one week at room temperature.

Be sure to tag @twosugarbugs on Instagram and hashtag it #twosugarbugs

This site uses Akismet to reduce spam. Learn how your comment data is processed.

©two sugar bugs.  All images and content are copyright protected.  Please do not use our images without prior permission.  If you would like to republish a two sugar bugs recipe, please rewrite the recipe in your own words and link back to the blog post and one to the home page.  See my privacy policy for full details.

Being in the kitchen and baking is one of my happy places! I created two sugar bugs (named after my two daughters💗) to share all the recipes I make in my own home. Here you'll find approachable and delicious recipes. More about me →