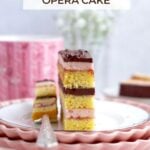 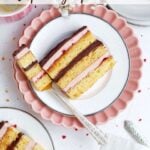 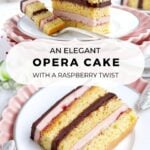 Raspberry opera cake is a variation on the classic French dessert. This opera cake recipe has layers of almond sponge, a filling using jam and raspberry buttercream and a luscious chocolate ganache. I walk you through all the steps to assemble this cake and you'll be amazed at how easy it is!

Have you ever had opera cake? I was first introduced to it years ago by Mr. two sugar bugs. This classic French dessert is typically a labor of love due to all the steps involved in creating it. But it sure is elegant and delicious!

I had a lemon and blueberry version this past fall when Mr. two sugar bugs and I snuck away to the desert for a few days and it got me thinking of other variations.

Opera cake was my husband's request for his birthday cake this past year and while I enjoyed getting to bake without any other pressures, it literally took me all day to make the cake.

So I set out to make an opera cake that is a bit easier. Don't get me wrong, there are still several steps in this cake recipe, but I've replaced the coffee simple syrup with raspberry jam {all you have to do is open the jar!} and the finicky French buttercream with my easy peasy not-too-sweet American buttercream.

what is opera cake made of?

The classic French cake is made of an almond sponge {called Joconde}, a coffee syrup soak, a French coffee buttercream and a rich chocolate ganache.

This variation on the classic dessert keeps the almond sponge and chocolate ganache, but substitutes the coffee syrup with raspberry jam and the French buttercream with my easy not-too-sweet American raspberry buttercream.

why you will love this easy homemade dessert

how to make the almond sponge

Start by preheating the oven and preparing a 9x13 baking pan. I use USA Pan Bakeware and cannot recommend them enough! Butter the pan well, lay a piece of parchment on the bottom and then butter it again.

Next you will whip the egg whites and granulated sugar until a thick, glossy meringue forms.

Then add the almond flour, confectioners' sugar, and all-purpose flour to the bowl of a stand mixer and mix with the paddle attachment to combine the dry ingredients. Next add the three eggs and mix until a thick batter is formed.

Now take about ⅓ of the meringue mixture and fold it into the batter with a spatula. Once combined add the remaining meringue and the melted butter and gently fold until a thick batter is formed, being careful not to deflate the batter.

Pour the batter into the prepared pan and smooth the top with an off-set spatula before baking. The cake bakes quickly, about 10 minutes. The edges should be lightly brown and be pulling away from the sides of the pan when it's done.

Allow the cake to cool in the pan for 5 minutes before inverting the cake onto a wire cooling rack. Remove the parchment from the bottom of the cake and allow it to cool completely.

Once cool, trim the browned edges off and then cut the cake into three even rectangles.

Set aside at room temperature until a thick and spreadable consistency, which takes about 1 hour.  If you would like to speed this process, place the bowl in the refrigerator, stirring about every 3-5 minutes.

This buttercream also uses less confectioners' sugar, so the frosting flavor is more similar to a French or Swiss buttercream and isn't so cloyingly sweet. To give it the pink hue and raspberry flavor we will be using jam.

Remember to pin this recipe to Pinterest! Use the button on the recipe card or the share buttons on the side or bottom of this page.

how to assemble raspberry opera cake

Start by placing one layer of the sponge cake on a serving plate or cutting board. Then top the cake with a layer of raspberry jam, followed by half of the raspberry buttercream smoothed in an even layer.

Next place a second layer of cake on top of the buttercream and again cover the cake with a layer of raspberry jam.

Add half of the chocolate ganache and spread it in an even layer over the jam layer.

Then place the last layer of cake over the chocolate ganache, spread the jam over the cake and finish by smoothing the second half of the raspberry buttercream over the top.

Once all the layers are in place, put the cake in the refrigerator to chill and firm up.

After the cake has chilled and the buttercream is firm {this takes about 30 minutes}, warm the remaining chocolate ganache to a pourable consistency. This takes just a few minutes over a double boiler.

You want the ganache to be pourable, but not hot. If needed, let the ganache sit on the counter a few minutes before pouring it over the cake and smoothing it in an even layer. I use my trusty off-set spatula for all of the smoothing in this cake. Then place the cake back into the refrigerator to firm up the ganache topping.

Once the ganache topping has firmed in the refrigerator, conservatively trim off the edges to neaten the appearance. Someone has to test a few bites as well, just to make sure it's okay to share!😉😉

Then slice and enjoy!!

Remember to snap a picture and tag me on Instagram if you make this Raspberry Opera Cake. It warms my heart to see you bring these recipes to life! Thank you for being here and happy baking!

If you make this recipe {or any recipe!} from two sugar bugs please come back and leave a review and a ⭐️⭐️⭐️⭐️⭐️ star rating.  I read every comment, and I LOVE hearing from you!

Store any leftovers covered tightly in the refrigerator for up to 5 days.

The nutrition information is an estimate only and may not be entirely accurate.

Did you make this recipe?